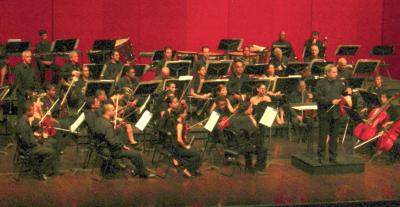 in the midst of the political madness, i decided to go hear the national symphonic orchestra of cuba, in town for one night only at the teatro nacional ruben dario. weaving our way through many blocked-off and other over-crowded streets filled with re-routed traffic (while the main political protests were today, saturday, there were "preludes" last night), i and my two colleagues/friends made it to the theater. sitting in our second-balcony seats, we were surrounded by managua's cuban community - adults in their 50s and 60s in neatly-pressed guayaberas sharing stories about their home states of matanzas, trinidad, santa clara in the joined-syllable accent of cuban spanish. the concert celebrated the orquesta's 50 year anniversary and was stupendous - they played three pieces by european composers exquisitely, i was literally swept away by the crescendoing finale of rossini's overture to "guillermo tell"; then, the orchestra switched moods and styles and played two pieces by cuban composers based on typical cuban rhythms, one danzón and one guaguancó - during the former, the entire string section broke into "palming" their instruments to the one-two-three beat, it was fantastic and the crowd loved it! who ever thought they'd want to bust out and dance at a classical music performance! the night was true testimony to the social and cultural benefits of the cuban revolution: decades of investment in music training has produced an incredible depth and diversity of talent. i wish figuring out the political situation here was as easy to do as enjoying a night of cuban classical music.