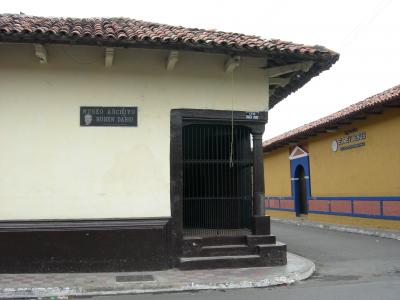 according to recent census data, the departments of León and Chinandega have among the highest rates of emigration, as people leave for Costa Rica, the US, and other C. American cities. So I took a trip this weekend to León, to visit my one contact there, a professor of History at UNAN-León who is Austrian but resides in León with her husband and son. The passage in microbus from Managua to León en the carretera nueva is beautifully scenic, about 80km of lush volcanic lowlands, literally steaming hot, with small pueblos lining the highway. León itself has a fascinating history, including being a base of the struggle for Independence and in this century, for the overthrow of the Somoza dictatorship. The centro is compact and walkable, full of colonial architecture. I had the chance to visit two museums during my visit, including the museo de la Fundación Ortiz-Gurdián, with a fascinating collection of contemporary Central American art. I also stopped by the casa-museo Rubén Darío and along with a group of local high school students, took notes on the life of this famous Nicaraguan poet, who established himself in the early 20th century as one of Latin America's most important modernist writers. I'll share a few words from Darío (attached foto is of the Rubén Darío casa museo) -