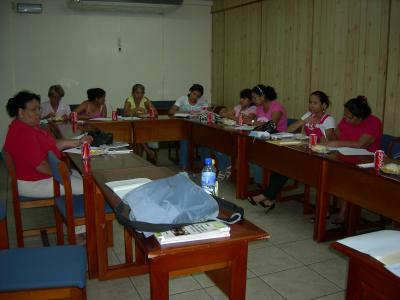 In Managua, I've begun working with the Red de Mujeres Familiares de Migrantes (the Network of Women Family Members of Migrants); this group is one part of a binacional network of women migrants and their families. The main branch of the Red is based in San José, Costa Rica, and consists of Nicaraguan women migrants living there. The Red has as its goal to promote actions, laws, and programs in both countries (Costa Rica and Nicaragua) that take the particular situation of women migrants and their families into account. For example, they work to end labor discrimination (most Nicaraguan women migrants in San José are employed as domestic workers and labor for little pay with few protections), promoting rights to documentation (e.g. legal status for themselves and their children), and increasing access to sexual and reproductive health services. Yesterday in Managua I met with a small group of women from the Red of family members, and we spent several hours reviewing one of my questionnaires (a pilot interview of sorts; "cognitive interviewing" in social science methodology - I asked them what they thought of the questions, they gave me their feedback, etc.). These women, several of whom are grandmothers caring for grandchildren left behind by migrants, are extremely open to sharing their stories with me and told me, "it's about time someone paid attention to us, the grandmothers"!  I'm looking forward to conducting more in-depth interviews with them and getting to know their families over the next few months, and to collaborating with the Red in their work. I feel incredibly blessed to be here, doing this work, in the presence of women with such incredible resilience, strength, and perseverance.  peace & love to all my friends and family, kristin