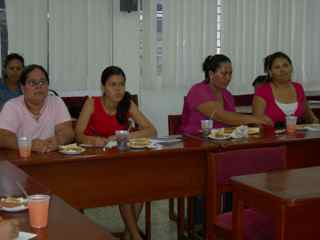 This past week, along with the Red de Mujeres Familiares de Migrantes (Network of women family members of migrants), I spent two days attending workshops, focus groups, and interviews focused on the relationship between migration and housing issues. This small study was coordinated by the Costa Rican NGO that finances the Red, and resulted from what was perceived by Nica women migrants living in Costa Rica as the great need for access to affordable housing. Most Costa Rican government programs exclude non-citizens from benefits (sound familiar?), so that even Nicaraguans who are permanent residents in CR and have "legal" work permits can’t access these programs. As a result, many women migrants working as domestic employees in San José end up taking residence in the homes where they work, often having their salaries deducted up to $100US or more per month for the rent of small rooms. (Of course, living where they work also implies less time off, less personal time and space, etc.) However, while housing may be a main issue for Nica women migrants living in CR, it is less clear that is a central priority for family members of migrants here in Nicaragua. In my own interviews (with what are now my the 17 families participating in my study) the three priorities on which remittances sent home by migrants are spent are: 1) food, 2) education, and 3) health care. While families with longer-duration migrants eventually are able to invest in home improvements if they desire to do so, during the first few years of migration, housing is less a priority than these other basic needs. Nonetheless, some interesting themes emerged during the focus group this past week, including: the importance of women getting their names on legal titles to their homes and property (rather than leaving this only in the name of their husbands and thus being vulnerable to losing everything when, as they often do, their husbands leave for other women), and the fact that most women dream of having a comfortable home of their own to leave to their children (so having a home is not just the "American Dream", but more a generally shared life goal). Also interesting is that conflicts over land and property stemming from the war years of the 1980s continue to plague some families, with disputes over ownership at times dividing siblings and extended kin. While housing issues are not a main focus of my own study, in several of the families I work with, housing has played a central role in their migration stories. For example, in the case of "Aurora", her daughter "Elizabeth" left for Spain two years ago and works long hours as an adult caretaker in Madrid. This mother migrant’s main goal in leaving Nicaragua was to pay off her debts on the home that is now in her name (she changed the title after divorcing her husband a year before migrating), in order to leave the house in the names of her two young daughters. For Elizabeth, then, housing is in fact a central focus of migration. [Note: pictured here are women participants in the focus group on la vivienda.]